A downloadable game for Windows

Take command as captain of your own pirate ship in the fictitious island region of Odora. As captain you might find that a pirate’s loyalty can be a…  flexible matter.

Mortal adversaries aren’t your only concern however, the seas hide a threat far greater than an ill-tempered crew.

"What do you think you’re doing!? Is it normal to rob sleeping people where you come from?"

Special thanks to Arjen Wester for the UI art /voice acting, and to Marjan Veen, Martin Veen, and Delano Goosen for voice acting.

Initially, Eternal Seas was made to sharpen our skills in game development and explore an idea we had in mind. Due to an overwhelming interest we have decided to complete this project to a full release! Follow us here and on Twitter (@eternal_seas) for regular development updates. Before releasing the game in early-access we plan to implement the following features:

If you like where this is heading... it would help us out a lot if you share this game with anyone you know, or consider subscribing to our patreon.

We are also expanding our team! Our first addition is Myrte de Vrieze, who will be creating the original sound track. We are still looking for a motivated 3D artist for ships/characters/nature. If you are interested in working with us on this project, please contact Vincent through discord (VincentiusIV#7080).

Unzip everything from the downloaded file to some place on your computer, and double-click  "Eternal Seas.exe", Enjoy!

Hey! I played your game and here is the link to it!:

Hope the feedback helped! And yes, please let me know how the feedback session was! I would be more than happy to hear your thoughts about! Cheers, Good Work! And Happy Game Dev! :D

Reply
TsukuruHouse31 days ago(+1)
Cool⛵
Reply
Rahnaf36 days ago(+1)
Enjoyed it and the game definitely has a lot of potential. Loved the mechanism of the gun, the shooting felt very satisfying! Would love it if some voice acting gets added in the future too. Also, I was wondering, does the story change depending on your choices during the dialogues?
Reply
escompany36 days ago(+1)

Thank you for playing! Yes, your choices do affect the story, such as choosing who will become your boatswain. Others are more subtle,  e.g. if you encounter Rowland at the campfire, your choices there will affect how he greets you on Salathiel's ship.

I see. Best of luck for future development!

This was an awesome demo! It's like Monkey Island, POTC, Wind Waker, and Deus Ex mixed together and I loved it. My biggest minor gripe is that the controls for the ship are a little TOO slow at times. I had trouble pulling up beside the skeleton ship but other than that, it was great! This could be the next best pirate RPG that we need!

STORY: Like I said, very well done. I loved the Deus Ex-style dialogue choices. I felt connected to our captain.

EXPLORATION: Very beautiful and fun even if the music is a tad bit repetitive. This could be the spiritual successor to Wind Waker!

COMBAT: Swordplay was a little awkward. Great animations but could use a bit of refining and more tight controls.

NAVAL: I love the whole multiple speeds concept of the ship. It's way better than Sea Of Thieves in my opinion but like I mentioned, the turning was a bit wonky. I look forward to naval combat with cannons!

Hi. I played your game and recorded it on a video. It was very entertaining, and I was very engaged. It reminds me of such games as assassins creed four and classic gothic. They are my favorite games. :D I love the idea and sandbox parts. Here are the answers to the feedback questions:

1. I felt connected to the captain and the mention servant.

2. I felt like the sandbox could be very fun and big. Gothic games did not have a vast amount of items. However, each thing I could find felt very rare and useful. I could feel mightily rewarded.

3. The combat was easy but satisfying enough to not to bother about it. I felt powerful.

4. I enjoyed sailing. I like such a gameplay. Sadly, Such sailing gameplay sandboxes are not very popular now.

5. I am not rich, and I may not have enough time to buy and play all the released games nowadays. However, if the game had more immersive physics, I would spare 10 euros to purchase it.

If you want me to delete the video, let me know. However, if you like the video, I make similar videos every day. I will be happy if you subscribe. Anyway, I enjoyed playing your game.

I love a good pirate game and this one did not disappoint!

The low-poly art style is really pleasing and has good contrast.

The default controls were very intuitive.

The music could be much better. I can recommend the person who did the music for my game: https://www.tysoncaziermusic.com/video-game-music

Very impressive to see cutscenes from a small indie team. It really adds to the story.

The text scrolled by at a good pace and I liked the dialogue options. It seems like the choices affect the story.

There was some clipping with the foreground character in this scene here: 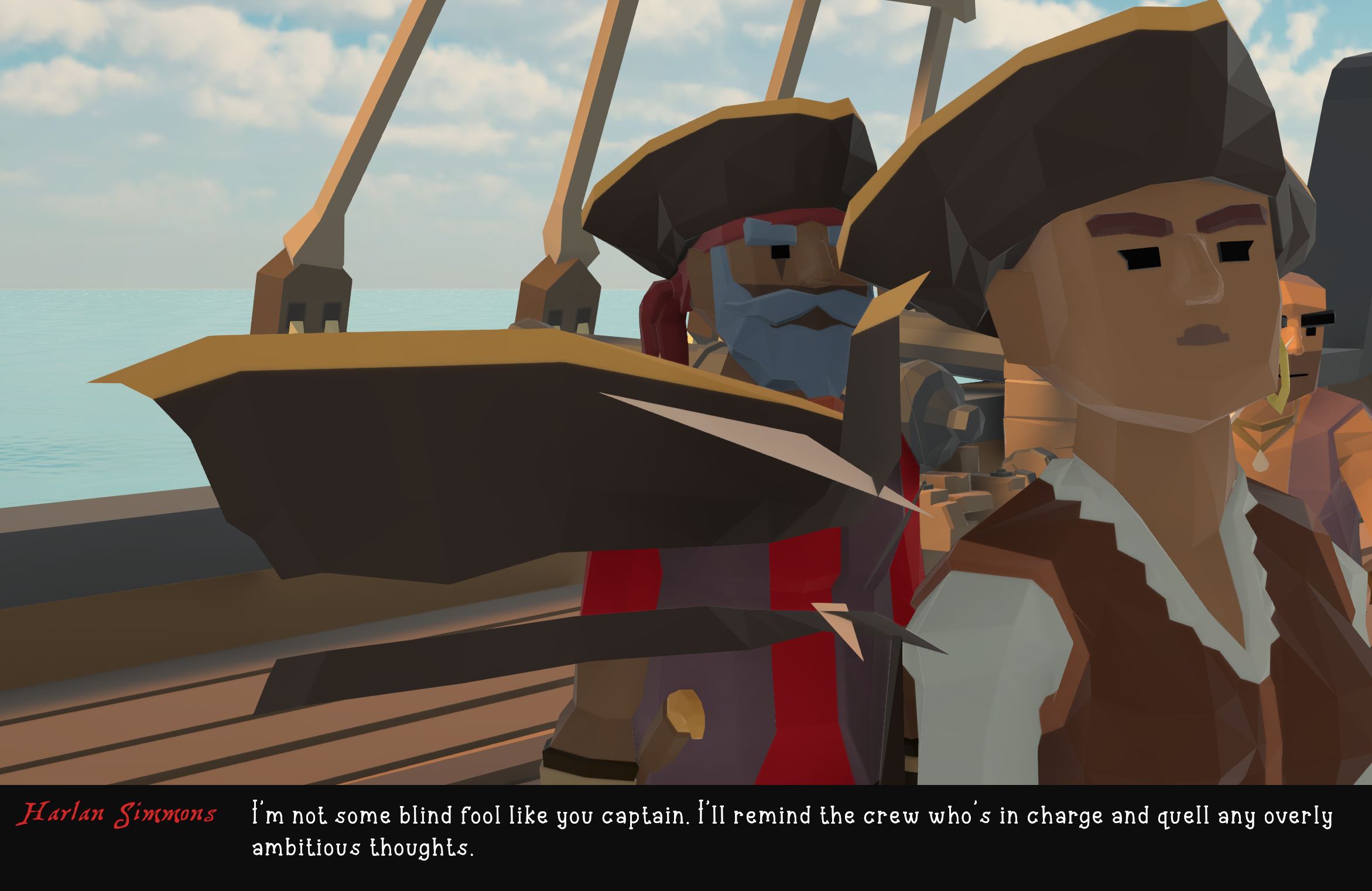 The voice-acting was rather monotone -- in some scenes, pirates would be shouting at each other in the text, but the spoken dialogue didn't really reflect that. There needs to be more inflection and emotion and maybe consider having the real words spoken instead of a made-up language.

In the very first scene, I remember being confused about who my character was, because both characters had hats and looked like captains. So maybe make the player character a little more distinct.

The sword and gunplay was satisfying and I liked how there was a reload time and animation between shots. It really makes you ensure that your aim is on point!

Both in and out of battle, the default movement speed of the player feels a tad slow. Maybe make an option to permanently turn run on so the player doesn't have to hold Shift all the time.

In some battles, I had a real hard time telling between my own crew and enemies. Maybe make it so that everyone on your ship wears the same colored headgear (or some other article of clothing).

Just being able to sail a ship was great fun and I especially liked that you could steer your ship and go back down to the deck view and walk around on deck while you coasted on the ocean. I was impressed too that I was able to make my character walk over quite a few parts of the ship, including the bow sprit.

In the last half of the demo, I did notice some strange shapes floating around:

Finally, there was one sailing bug I noticed on the last island. I pulled up alongside the pier and came to a full stop. I disembarked and finished all the tasks for the last island. But when I got back onto my ship, I found that I couldn't leave because the ship can only go forward and I had managed to get it permanently stuck. Maybe add a button that distances your ship from the nearest object to prevent this.

The water looks okay, but could be better. It has a very tiled appearance to it

Very impressive demo coming from a two-person team and I would definitely love to see this in a full release! The problem I've experienced with a lot of pirate games is that they try and do too much and get over-complicated. The simplicity of your game is its greatest strength.

Thank you so much for playing and your elaborate feedback! :) 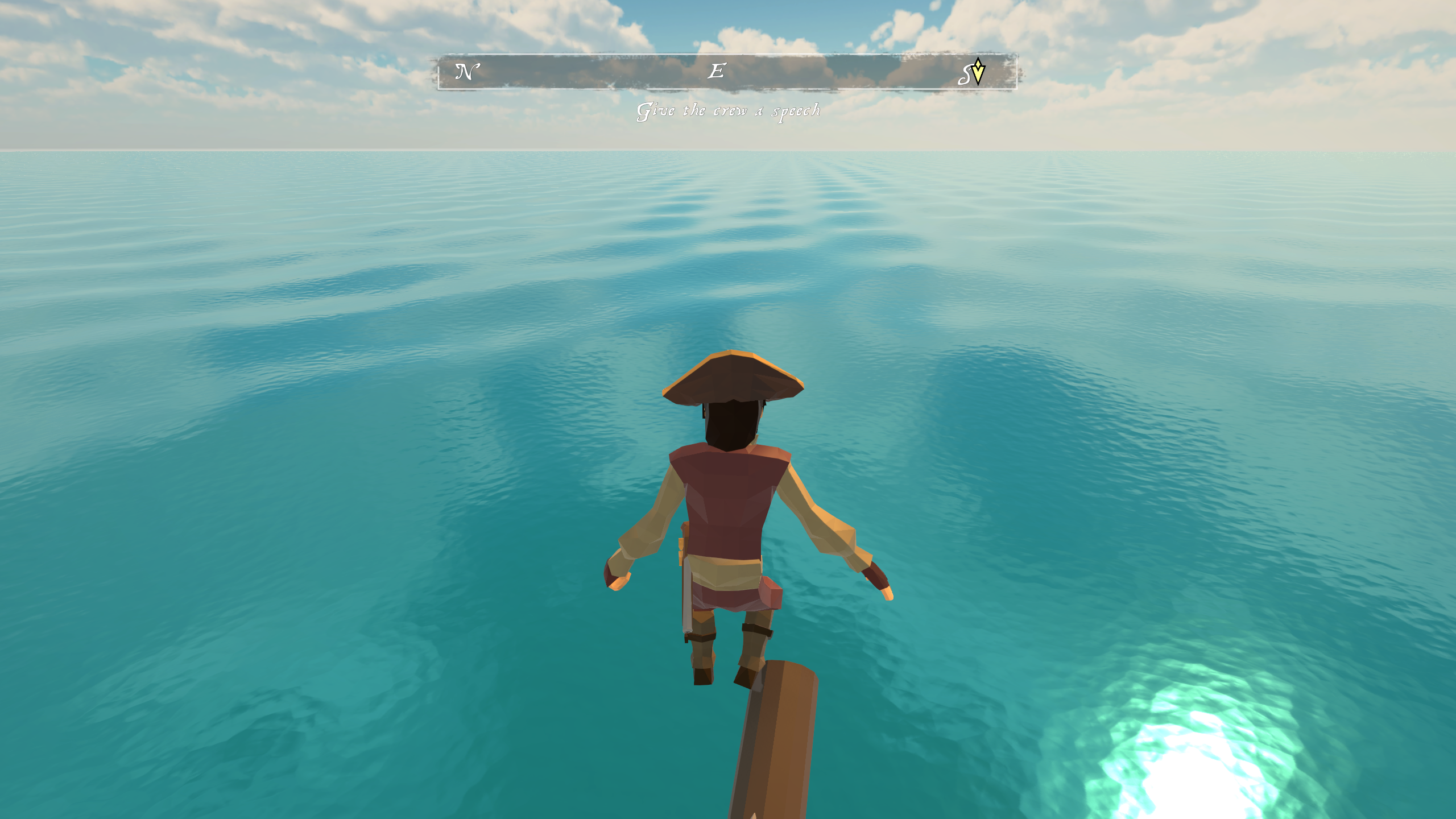